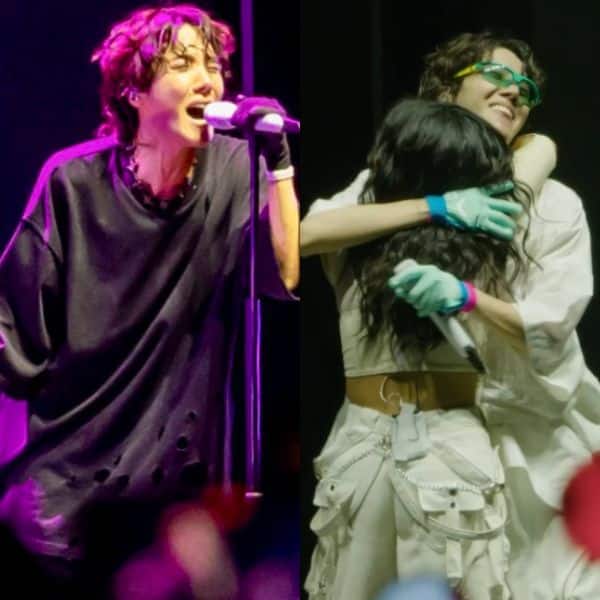 BTS member J-Hope left no crumbs at the Lollapalooza Festival. The main dancer, rapper and sub vocalist of BTS performed for over an hour at the festival. He sang his entire discography except Mama for a crowd of over one lakh. This is the highest attendance for a BTS member event. Las Vegas’ SoFi stadium has a capacity of 70,000. J-Hope was joined on the stage by Latino singer, Becky G. They collaborated for the song, Chicken Noodle Soup in the past, and performed on it for the audience. TXT members, Jimin and Bang PD cheered J-Hope from the stands. The Golden Hyung of BTS admitted that he was stressed about smearing the BTS name if he did not do well. J-Hope practised daily for six hours and more to deliver a perfect evening for the crowd. Even locals have loved him. Here is a rewind of his moments… Also Read – Ananya Panday to Samantha Ruth Prabhu; Bollywood actresses and their HOT celebrity crushes

J-Hope and Becky G on the stage
She joined him as they sang and danced on the chartbuster Chicken Noodle Soup. Becky G said that she was proud of her bro, J-Hope who was killing it. The two shared a hug as well. Also Read – Sara Tendulkar, Nysa Devgn, Sara Ali Khan, and more star kids who got recently trolled for bizarre reasons

J-Hope did a new choreo of Dynamite
This was a huge surprise for the audience. No one expected a new dance version of Dynamite on the stage. Jimin said that he did not inform the members about it as well. Also Read – Sara Ali Khan mercilessly trolled for awkward ramp walk; the internet asks, ‘Qamar toot gayi hai kya?’

J-Hope cursing in English
There is something about the US that takes out the wild side of BTS member. We remember Joon’s Make Some MotherF**king Noise and Taehyung’s Holy Shit. Jung Hoseok also cursed quite a bit (as per BTS standards) on stage.

J-Hope’s entry on the Lollapalooza stage
Keeping with the theme of Jack In The Box, J-Hope came out of a box with electric energy on stage. His long hair was perfect for head banging. Sir Jung Hoseok made fans crazy and how.

THE WAY HOSEOK JUMPED OUT OF THE BOX. THATS THEEE ENTRANCE. #HOBIPALO0ZA pic.twitter.com/YTbu5E8Aj2

BTS J-Hope soaks in the fan chant
The rapper went wow hearing the loud fan chant. With his long hair, chiseled jawline and that glistening skin, J-Hope looked handsome and hot as hell. We could feel his emotions.

BTS member J-Hope vibing on Blue Side
The song Blue Side from his mixtape Hope World is loved by ARMY and J-Hope fans. It speaks about his more introverted emotional side, which is hidden from fans. He really felt the song with fans creating an epic moment on that stage.

This moment for ‘Blue Side’ with so many supportive crowds is so emotional ?please look up at his written lyrics for this song and you will know and feel jhope emotions right here ???? #jhope #Lollapalooza #HOBIPALOOZA pic.twitter.com/7qEq7tWdYK

BTS member J-Hope committing Arson at Lollapalooza
Arson, the song from Jack In The Box made a great impression with the two music videos, More and Arson. The latter is a masterpiece. J-Hope recreated that walk from Arson for his music video.

This was a short compilation of all the great moments of BTS member J-Hope on the Lollapalooza Stage in Chicago. The mayor of the town welcomed Hobi on stage. BTS is now gearing up for the Busan concert.