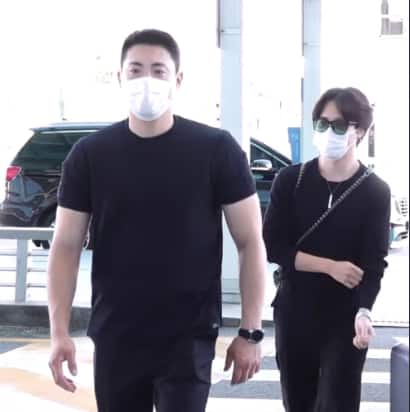 BTS is mobbed by fans all over. Park Jimin left Incheon Airport on Saturday morning to travel to Chicago for the Lollapalooza Festival. He was dressed to kill in Chanel, Fendi and other top brands. Though Big Hit Music did not release any official statement that Jimin is leaving, media and fans gathered there after an unofficial tip-off. The Filter singer asked the media how did they come to know that he was leaving when no announcement was made for the same. They told him that he was the Park Jimin and such a news could not be hidden for long. Also Read – From Naagin 6’s Urvashi Dholakia to Shweta Tiwari and more – TV beauties who are defying age in swimsuits in their 40s

Now, Jimin’s bodyguard is getting a lot of love from ARMY for protecting Baby Mochi like an action hero. Compared to Jimin, the guy is tall and looks like a hulk besides him. A number of people had gathered and some of them seemed to charge towards the singer. Not wasting a minute, his bodyguard pushed them away to protect Jimin. ARMY has thanked him for his efforts. Some even said that Jimin’s bodyguard was too handsome. Take a look at the video and reactions… Also Read – BTS: When Jin asked Kim Taehyung to choose between J-Hope and ARMY – Watch V’s reaction

lets take a moment to appreciate jimin’s bodyguard he is HUGE ? but look at him doing it all to protect our prince ?? pic.twitter.com/x2emuqs71o

not to be rude if someone would shove their phone on jimin’s face or any of the tannies face and that is how my body looked /strength (the bodyguard) i would’ve punched the shit out of you maybe I’ll lose my job for punching someone but like give they deserve S P A C E https://t.co/b9fuadwr5N

that video of jimin’s bodyguard shoving those sasaengs got me smiling so hard…that was peak cinema pic.twitter.com/4gbOE2hy34

lets take a moment to appreciate jimin’s bodyguard he is HUGE ? but look at him doing it all to protect our prince ?? pic.twitter.com/x2emuqs71o

Jimin getting escorted by 4 bodyguards who look like they’d throw anyone to the nearest trashcan if needed.

I’ll settle for THIS bodyguard though…if I can’t have Jimin??? pic.twitter.com/PhDdD2eyW2

Jimin has gone to cheer BTS member J-Hope aka Jung Hoseok at Lollapalooza Festival in Chicago. He was seen with TXT member Beomgyu at a restaurant in Chicago too. We are not sure if Jimin will do a small gig with J-Hope on the stage. Also Read – Bigg Boss 16: Disha Parmar, Ankita Lokhande, Vivian Dsena and more top names approached for Salman Khan reality show