Kareena Kapoor Khan and Saif Ali Khan’s son Taimur Ali Khan has got a pretty little lady friend. Kareena took to her Instagram stories and shared a picture of Tim and his friend from their playdate. The Good Newwz actress took to her Instagram handle and wished the little doll. Both Taimur and the young girl has mischief written on their faces. We all know what a goofball Taimur Ali Khan is. And seeing him with his friends being mischievous is all the more adorable. Tim and his friend seem to be enjoying their playdate in a fun zone. Bebo and Saif’s elder son is seen in a blue shirt and black pants whereas the young lady is dressed in green. Bebo wished her on Taimur’s behalf. Check out the picture here: Also Read – Salman Khan, Kareena Kapoor Khan, Shah Rukh Khan and more: Celebs who showed their generous side and worked for free in certain films 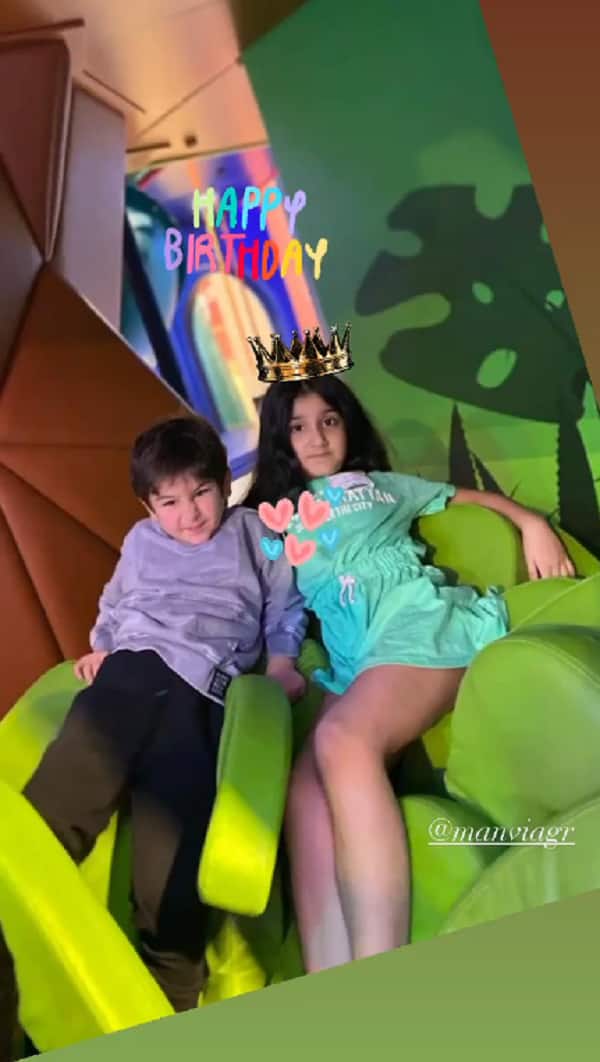 Also Read – Sara Ali Khan OPENS UP on coming from a broken family: ‘I don’t really carry the burden of loneliness’

Kareena Kapoor Khan is a doting mother to both Taimur Ali Khan and Jehangir Ali Khan. The actress, of late, has become a bad cop in the house as the Bhoot Police actor seems to spoil his kids a lot. The Laal Singh Chaddha actress had opened up on the same. The actress revealed that their routine went haywire during the lockdown. “I am not very strict…I think I am quite relaxed and chill. I have to inculcate discipline a little more as Saif spoils Taimur so much that it annoys me sometimes. And during the lockdown, our schedules went haywire. So, Saif would want to watch a movie with Taimur at 10 pm and I would have to step in and say no because it is his bedtime.” Also Read – Gehraiyaan release date out: Deepika Padukone and Siddhant Chaturvedi share a steamy lip-lock, fans say release it already

The Udta Punjab actress said that she has been trying her best to inculcate discipline and has become very particular about meals and bedtime after Jehangir’s birth. “With Saif being so relaxed, I have to be a little tougher as I feel children need to grow up with some sense of discipline.”