Kriti Sanon gets MOBBED by fans outside the sets of the film on her birthday; actress thanks all for their love 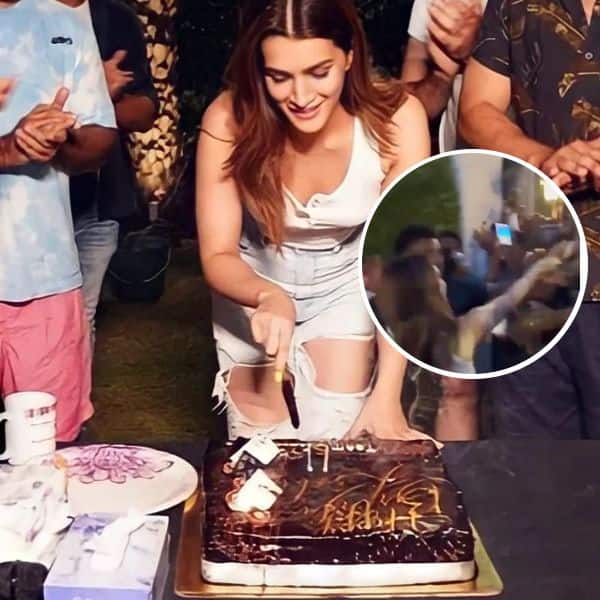 Bollywood actress Kriti Sanon recently turned a year older on July 29 and celebrated her special occasion on the sets of her upcoming film Shehzada with her co-star Kartik Aaryan. Kriti is a sweetheart who enjoys a massive fan following on social media. The Mimi actress recently got mobbed by her fans while she was busy shooting for Sehzada in Haryana. Yes, you read that right! On the sets of Shehzada, Kriti saw a huge crowd gathered for her as they wanted to greet her on her birthday. The video of fans gathered outside the sets went viral on social media. In the video, we see a huge crowd of Kriti fans who were seen screaming birthday wishes for her. Also Read – It’s AWKWARD! Urfi Javed, Kartik Aaryan and more celebs appear to be clueless about what they are up to

Kriti who was shooting heard fans cheering for her and wanted to meet them. Kriti took out time from her hectic shooting schedule and waved at her fans. She even expressed gratitude for their immense love and support. Pictures and videos from Shehzada went viral and fans are going gaga over it. Moreover, the team Shehzada brought a cake for Kriti and she was seen cutting it. Also Read – Kartik Aaryan, Aishwarya Rai Bachchan, Taapsee Pannu and more Bollywood stars who were shockingly replaced from movies

On the work front, Kriti has Ganpath-Part 1 with Tiger Shroff which will release on Christmas 2022. She also has Adipurush alongside Prabhas in her pipeline. She will also be seen sharing the screen space with Varun Dhawan in Amar Kaushik’s Bhediya. Also Read – Prabhas, Allu Arjun, Mahesh Babu dominate highest grossing Telugu movies in overseas too – view entire box office list with collections

Previous How Maggie shut trollers calling her ‘Sasti’, ‘B-grade’, ‘Mard ki body’ and more with her acting prowess
Next Aamir Khan plays masterstroke; locks THIS deal to go one step ahead of RRR, KGF 2 [Exclusive]